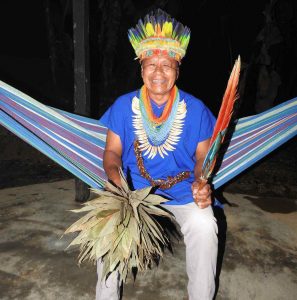 Yagé shaman Taita Bonifacio Gabino Garreta belongs to the indigenous Inga ethnic group of Putumayo (Colombia) and has been practising as traditional Yagé healer for well over 30 years now. His Maestros were Taita Fernando Mendua, Taita Guillermo Busitante and the most renowned Taita Querubin Queta Alvarado, “el Taita Tigre”, maximum spiritual authority of the Cofan people. He also remembers Taita Diomede Diaz, among the friends who accompanied him on the sacred medicine path of Yagé.

Taita Gabino prepares the Yagé brew by cooking together, for long 36 hours, over a wood-fire, the leaves of the Chagropanga vine (Diplopterys cabrerana) with the vine cuts of a Yagé variety known by the Ingas as “Tigrihuasca” (Quechua for “vine of the jaguar”), also known as “Yagé Tigre”. The name Tigrihuasca is due to the fact that the cross section of the cut vine displays a pattern which resembles the paw of a jaguar. Shamans dieting with Yagé Tigre for a very long time are believed to be able to shape-shift themselves into jaguars.

His Yagé brew is very concentrated, with an almost creamy consistency, and has a rather neutral taste (those who are familiar with the peculiar Ayahuasca/Yagé taste…will know how rare this is).

We are deeply honoured of working with Taita Gabino and to offer international participants and Colombian nationals alike the opportunity of doing deep medicine work with him and his wife, during our Finca-based Yagé retreat.