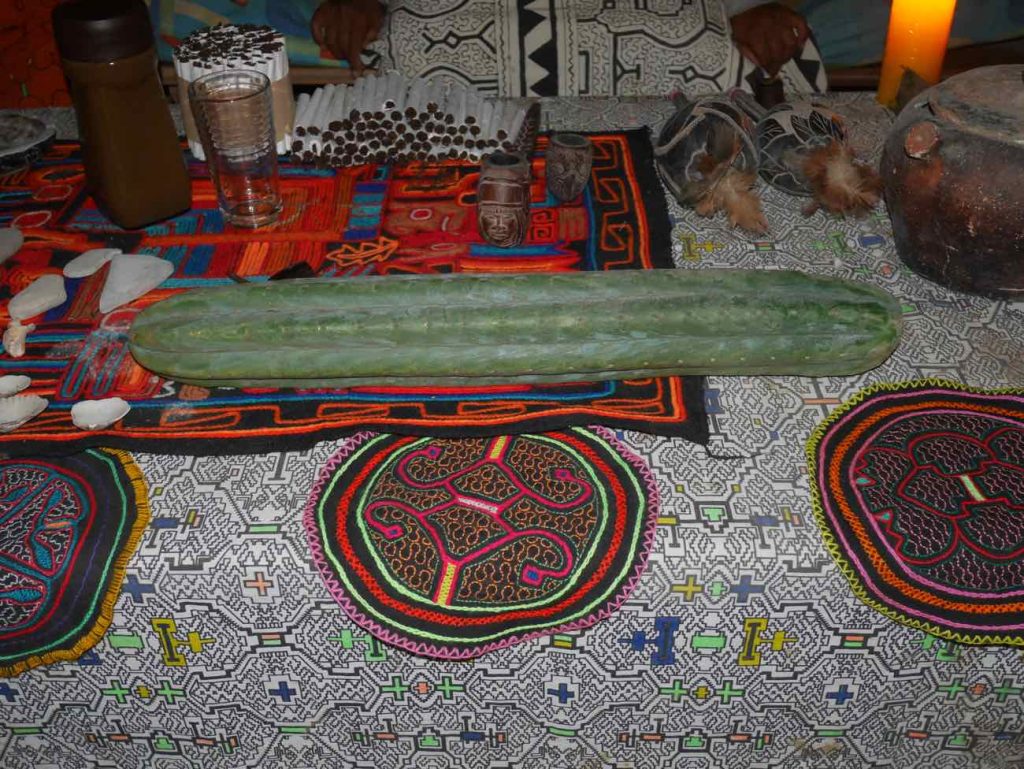 San Pedro (Huachuma) ceremony with master shaman Don Armando, in our centre in the jungle, near Iquitos (Peru).

“And after these things I saw four angels standing on the four corners of the earth, holding the four winds of the earth, that the wind should not blow on the earth, nor on the sea, nor on any tree.” Revelation, 6:1

San Pedro: The Magical Cactus of the “Cuatro Vientos”

Trichocereus Pachanoi B.R. is the botanical name of the night blooming and mescaline-bearing columnar cactus once known as “Achuma” and currently known in the Andean and coastal communities of Peru as “San Pedro”, “Wachuma”, “Huachuma”, or “Gigantón”. Botanists N. L. Britton and N. J. Rose were the first to classify the plant in 1920. It is found in Andean Ecuador, Peru and Bolivia; in Peru, it also grows in many places along the northern coast. 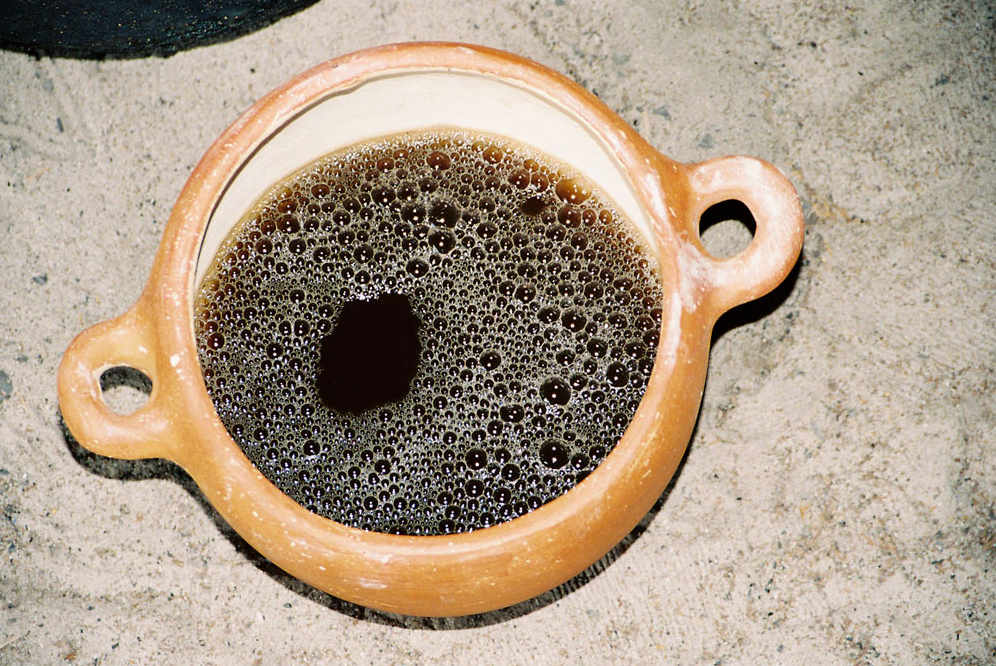 Local curanderos maintain that there are seven different species of San Pedro, all distinguished by the number of longitudinal ribs. The one they most commonly use is a seven-ribbed cactus. The rarest and most revered one, has four ribs. This is the sacred cactus of the Four Winds, the San Pedro of the cuatro vientos. Those who find it are thought to be very lucky (Sharon, 1978:39), great shamans or about to become such (Polia 1997:19). This cactus is also reputed to have special healing powers, in lieu of the magical link with the number four – and its correspondence with the “Four Winds” and the “Four Roads” – the supernatural powers associated to the cardinal directions, invoked during the San Pedro healing ceremonies (Sharon, 1978:39).

In Andean cosmology four is a special number: four were the regions of the earth into which the Tahuantinsuyu (in Quechua Tahuantin suyu means literally “the four regions between”) – the Inca Empire – was divided. The Incas built four roads, departing from Cuzco, each running through the four divisions of their empire. Conversely, the four quarters converged in Cusco (Qosqo), centre and navel of the world, very much like Delphi was for ancient Greece.

The tall cactus resembles thus an axis mundi, a cosmic axis linking the different worlds through which the shaman travels in vision and trance.

The Origins of the Cult: Las Aldas and Chavín

Around 1,300 B.C., i.e. 3,300 years ago, the priests of the Jaguar Temple at Chavin de Huántar – an oracular-shrine which was probably the focus and the origin of the most important pan-Andean religious cult ever – could have been using the sacred cactus in their rituals.

San Pedro Cactus depicted in a frieze of the ceremonial centre of Chavin de Huántar, Peru 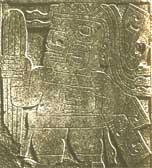 A stone frieze that lined the upper register of the sunken Circular Plaza in the Old Temple at Chavin features a mythical being, a fanged feline-anthropomorphic being, holding in his outstretched right hand the stalk of a four ribbed San Pedro cactus. Jaguar’s claws project from his feet, feline fangs protrude from his mouth, harp-eagle claws extend from his hand, snakes come out of his head, a two-headed serpent comes out from his ceremonial belt and wings extends from his back, possibly indicating the shamanic capacity to fly.

It’s possible that the whole of the Chavin culture rotated around an oracular complex and that the great Temple was like an Andean Delphi, a centre of the world, an oracular centre ruled by an absolute theocracy and focused on the cult of the jaguar (Polia 1997:18, 260), dios atrigado. In South America this is the shamanic animal par excellence, the most powerful on earth, capable to see through the darkness of the night. From the subterranean depths and obscure meanders of the Temple, a priest-oracle – intoxicated by the ritual sacrificial blood – gave in trance his responses with the voice of the Jaguar-God, lord of the dead, of night and vision.

Chavin textiles from the south coast of Peru, dating to the first millennium B.C. show again the cactus in association with the jaguar and what could be a hummingbird. Other depictions of the Huachuma cactus appear on ceramic manufacts of the Chavin period, where the plant is in association with a deer (like in a ceramic bottle from the northern coast, dating from 1000-700 B.C.), and with a spotted jaguar (in five instances, on vessels dated from 700-500 B.C.).

“Hummingbird, deer and jaguar are not alien animals in the shamanic world. Contemporary curanderos report how the hummingbird represents the shamanic capacity of sucking the magically-induced illness out of a patient affected by witchcraft. The deer represent swiftness and elusiveness, in counteracting the attacks of hostile entities” (Sharon 1978:40-41).

Nazca mummy bundles, the seed of life and San Pedro

The use of San Pedro continued after the decline of the Chavin culture, as shown by five ceramic urns of the Nazca period (100 B.C. – 500 A.D.) – all in the Museo Nacional in Lima – which were made in shape of mummy bundles from whose shoulders protruded stylized and clearly identifiable four-ribbed Huachuma cactus stalks. In a subtle and touching association, Sharon (1978:41) wonders at the possible analogy between death and rebirth, hinted by the presence of the night-blooming cactus raising from the shoulders of the dead. Like the San Pedro which blooms every spring at around midnight, so the spirit of the dead may be re-born and “bloom” in the spring of the afterlife. In Inca times the term mallqui referred to royal mummies, meant also “seed” (Sharon 1978:41). A touching and subtle equation is set between the seed-mummy, buried in the dark belly of the earth, and its re-birth in the afterlife, as the flower of the night-blooming San Pedro comes to life every spring, from the darkness of the night.

San Pedro in the Salinar Culture

Depictions of the Huachuma cactus are also present in manufacts of the Salinar culture (400-200 B.C.), which all show a four-ribbed representation of San Pedro stalks, which again may point at a subtle and explicit association to the “Four Winds”, the “Four Regions” and the ”Four Roads” that lead to them.

Like St. Peter held the keys of the Christian paradise, the cactus opens the doors of perception and makes one enter the Spirit world, accessing a paradisaical condition of communion with the divine. Needless to say, the Spaniards – along with their religious Catholic counterpart – who entered and conquered the New Continent held a completely different view of the traditional indigenous use of the plant.

Anello Oliva, a Neapolitan Jesuit monk, condemns in 1630 the:

“devilish superstition which still endure and is still much used by those people and their rulers. It consists in drinking, to know the good or bad intentions of the others, a potion that they call achuma, which is a water they make mixed with the sap of certain smooth and large thistles that are born in the tropical valleys. They drink it with great ceremonies and chants and, since it is much strong, those who have drunk it remain deprived of their senses and reason, and see visions […]” 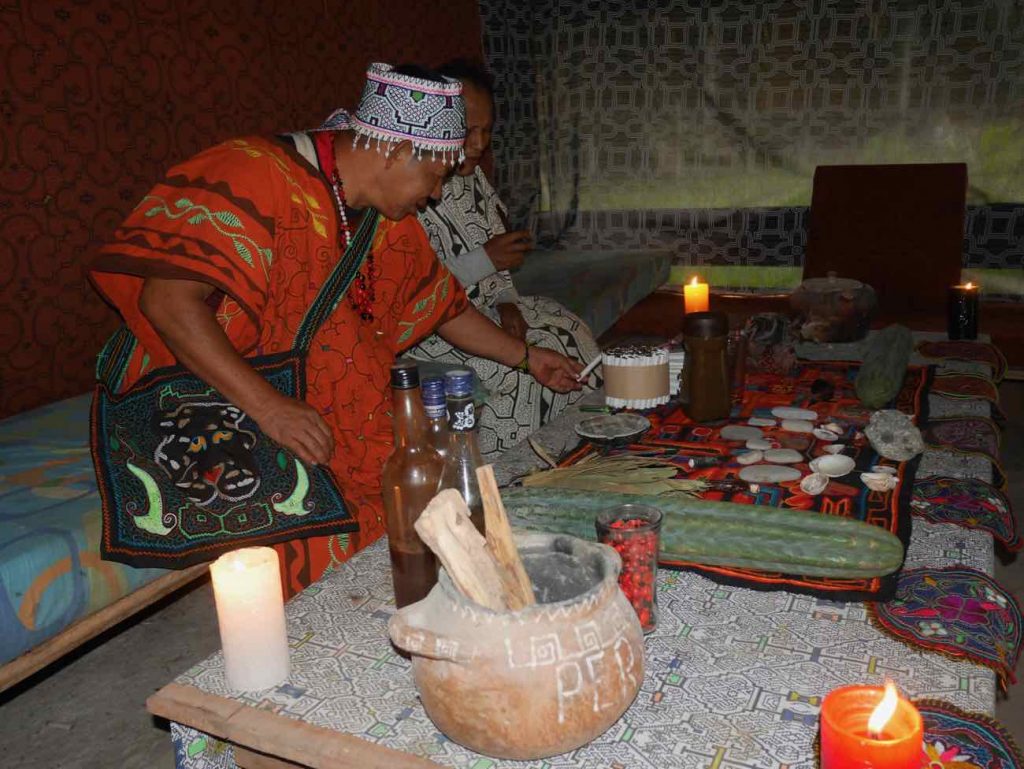 San Pedro (Huachuma) ceremony with master shaman Don Armando, in our centre in the jungle, near Iquitos (Peru).

The San Pedro now…in the Amazon

We offer to experience the magical San Pedro cactus either as a single ceremony (to complement the Ayahuasca, or shamanic diet retreat), or as a San Pedro retreat proper with Don Armando, or – when he is not available – with Shipibo Maestro Ronel. The San Pedro we use at the retreat is sourced directly from the Peruvian coast and air freighted fresh to Iquitos. Whilst the experience will differ from the Ayahuasca, being these two completely different master plants (one a tropical vine from the jungle, the other a cactus growing in the coast and mountainous areas of Peru), the way the San Pedro ceremonies are held in the Amazon follows more the Ayahuasca ceremony style, though one will be drinking the actual San Pedro brew. The way Amazonian shamans deal with San Pedro cactus is “to diet” with it first, as they would do with any plant teacher, or master tree from the rainforest, “to get to know it” and establish a spiritual-energetic relationship with it, “make friend” with the spirit mother of the plant, and work with it in assisting with healing, protection, and divination. Learn more…