⇐ Back to the Ayahuasca & shamanic apprenticeship retreat programme 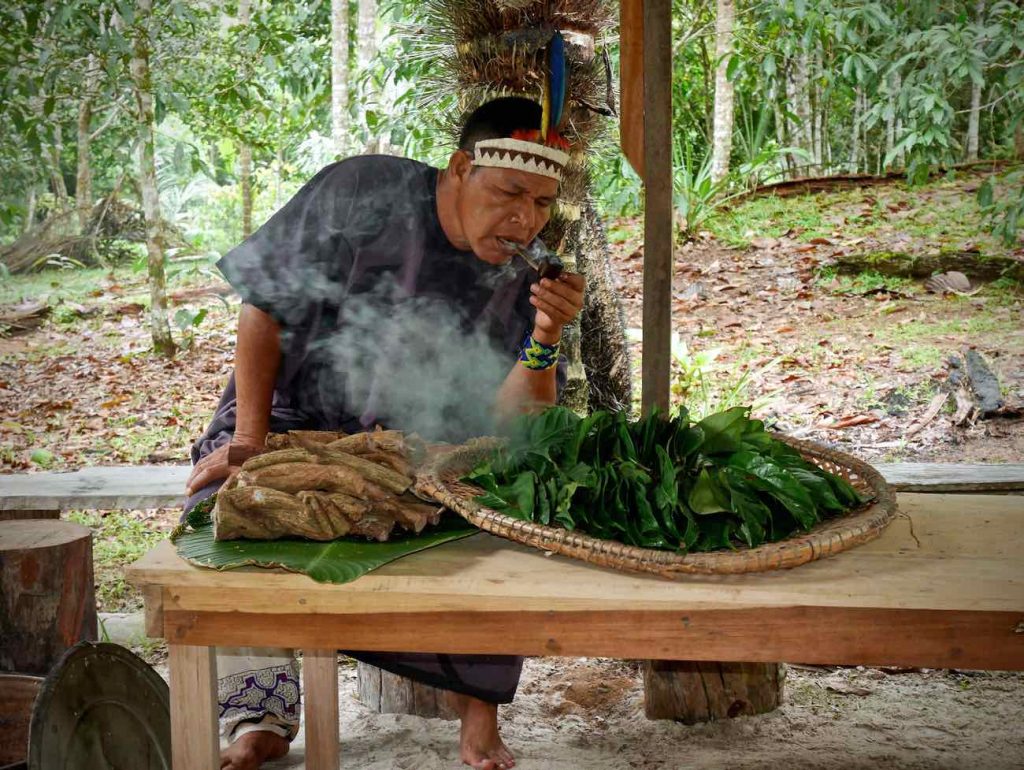 Don Armando Icomena is native of the Santana river-dwellers community located off the Rio Amazonas, north of the jungle town of Iquitos, in the Peruvian Amazon. He is a 50 years old master shaman, a most distinguished Maestro Palero, Ayahuasquero, Camalonguero, Toesero, Sananguero, and Rosacrucista who also works with the San Pedro cactus (to which he was initiated by his teacher in Tarapoto, in the region of San Martin). He was initiated to Ayahuasca by his grandfather shaman when he was only 12, and initiated to the shamanic dieta (with many different master plants, master trees, shrubs, and vines) since the age of 15. After the initial 3 years of dietas learning the ways of traditional Amazonian medicine and la ciencia of Vegetalismo, at the age of 18 he was formally appointed as Curandero by his teacher. He has now matured 35 years of experience in the field of shamanic plant medicine, and he is one of the shamans with the most comprehensive and extensive knowledge of Amazonian plants we ever worked with in both Peru and Colombia.

Not by chance he is the only shaman we ever came across in the last 21 years who prepares a very powerful concentrated brew made with a total of 35 master trees and vines (including the magical Lupuna blanca, the king of all master trees) to be taken during the long shamanic dieta and apprenticeship, and who also works with a vast array of plants like Ayahuasca (Banisteriopsis sp.), Coca* (Erythroxylum coca), San Pedro (Echinopsis pachanoi syn. Trichocereus pachanoi), Camalonga (Thevetia peruviana), Mapacho (Nicotiana tabacum, Nicotiana rustica), Cacao (Theobroma cacao) and Toé (Brugmansia suaveolens), which all rank among the most sacred and shamanically important plants in Peru. 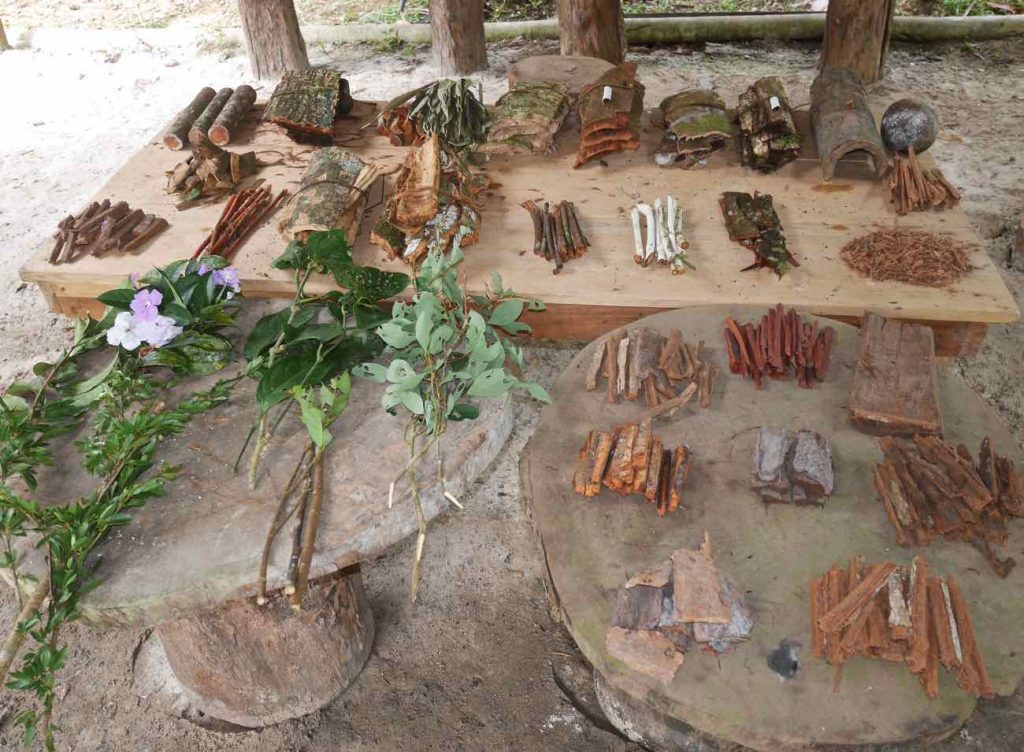 Some of the master trees, vines and plant teachers used by Don Armando in the making of the concentrated brew taken during the shamanic dieta.

With Don Armando you have the choice of following either the very intense & more powerful shamanic dieta – with nearly 40 among master trees, vines, and plant teachers, to be taken all at once – or else, go for the traditional shamanic dieta, dieting with only one master plant, master tree, shrub, or vine at a time (this will be anyway necessary/mandatory when dieting with special plants like Toé, Ayahuasca, Coca*, Camalonga, or Mapacho among others.

In the specific case of the Ayahuasca diet, one may diet with either Cielo ayahuasca (the best for initiations), Suni ayahuasca (Soliman ayahuasca/black ayahuasca) and Lucero ayahuasca (learn more here).

In the strict shamanic dieta with master trees – as well as in the dieta and pre-dieta with Ayahuasca – only the following food is allowed by Don Armando:

Free range chicken (pollo/gallina de chacra) is only allowed at the end, when the diet is finished and deliberately broken (dieta de alta), either as grilled meat or in form of chicken broth.No oil, fat, spices, chili, salt, sugar, sweets, fruit are allowed. Should one feel very debilitated during the dieta they could be given food with a little bit of salt and a a bit of sweet fruits (always “cured” by the shaman with special protective icaros, to avoid harm) for 1-2 days only, then they will return to their usual strict dieta, with no salt, sugar, fruit, fats, oil, spices, or sweets. 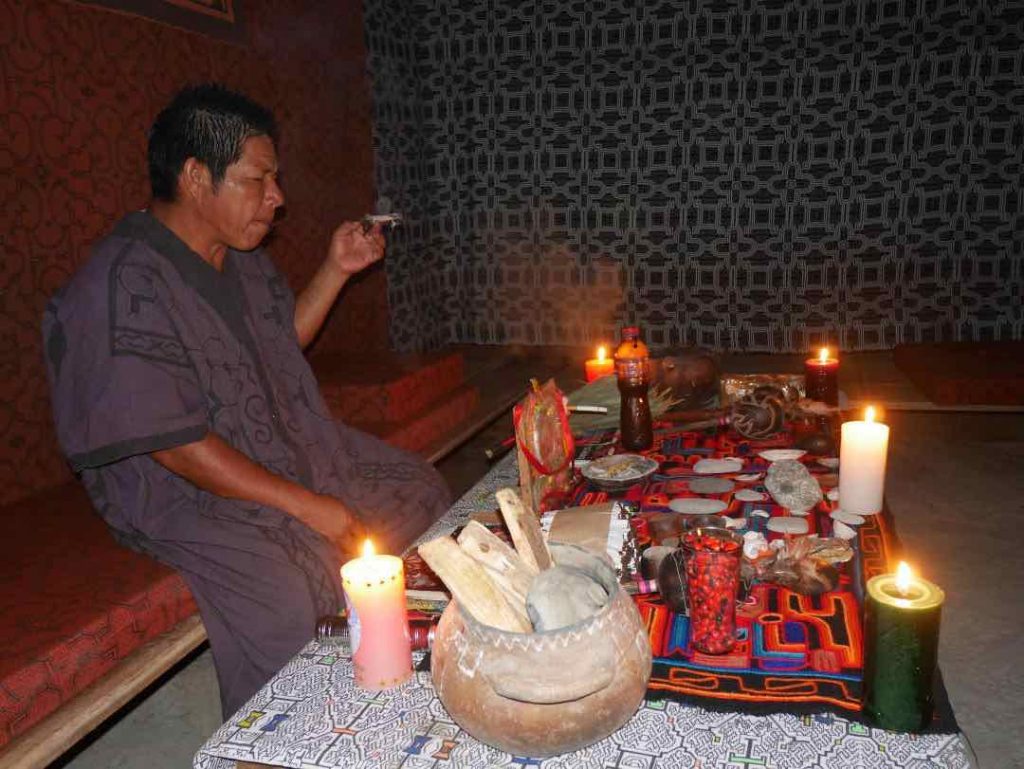 Ayahuasca ceremony with Don Armando, in our retreat centre, in the Peruvian Amazon, near Iquitos.

Don Armando prepares a very strong Ayahuasca brew with Cielo ayahuasca vine cuts mixed with the leaves of the Chaliponga (also known as Chagro, or Chagropanga, in Quechua – the Diplopterys cabrerana) vine, the leaves of the Chacruna (Psychotria viridis) plant, Mapacho cigars (organic black jungle tobacco), fresh Coca* leaves, and the bark of the Cacao tree (which ultimately gives the brew a rather sweeter favor,  and contains also a kind of gel which is soothing for the stomach). 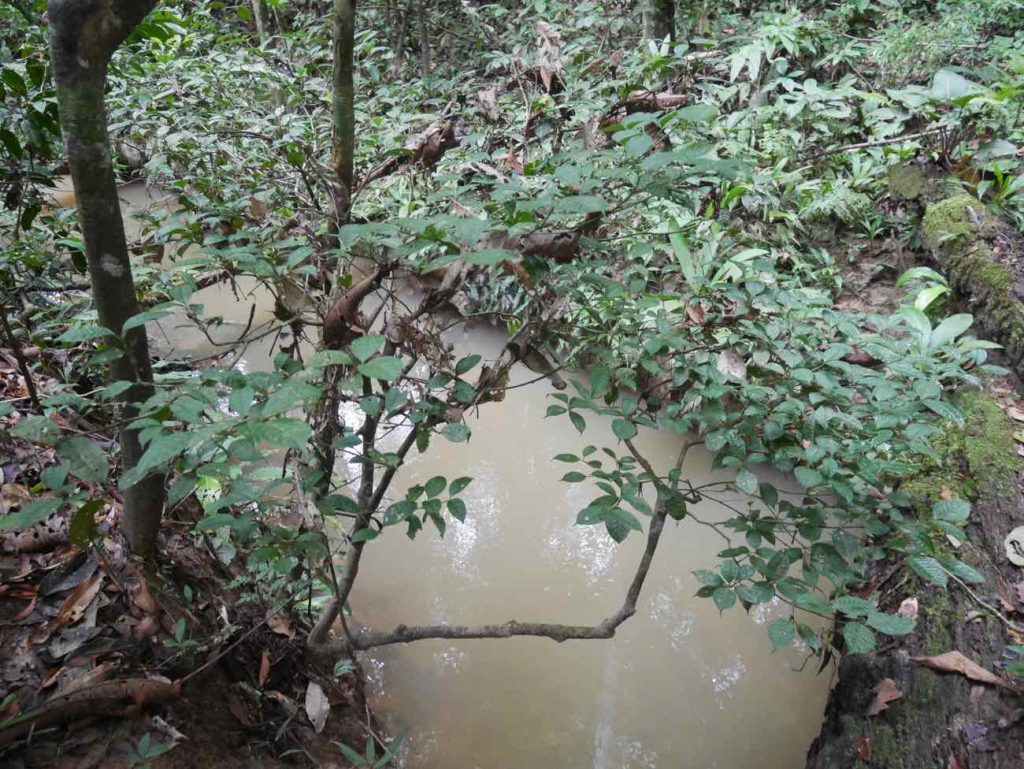 The powerful Puma chacruna plant teacher, growing by a jungle stream in the rainforest

In very special circumstances, subject to availability, and *by invitation only*, it might be possible to also experience the Ayahuasca brew prepared with the magical Puma chacruna plant, possibly the most powerful ever main plant additive to the Ayahuasca medicine we know of.  Don Armando first dieted with Suni ayahuasca (black ayahuasca) prepared with Puma chacruna for 3 months, when he was a 22 years old curandero, as part of a larger dieta of 9 months in the small indigenous Quicha community of Panayjillo, located near the Napo river, under invitation from the local curaca (higher authority), Don Fidel Alvarado Do Santos. The Puma chacruna grows in the rainforest, mainly on the edges of small jungle streams. The mother spirit of this plant appears in vision as either a giant, raging, all-powerful red-coloured cougar (puma concolor), or as a giant black panther. It connects one with the earthly realm, with all living animals, plant teachers and master trees. Ayahuasca prepared with Puma chacruna delivers many more, more intense and much more powerful visions than the brew prepared with the conventional Chacruna (Psychotria viridis), or Chaliponga/Chagropanga (Diplopterys cabrerana). To locate and harvest this plant teacher in the wilderness it is necessary to trek for a full day in the Amazon jungle.

Don Armando’s icaros are sang mostly in Quichua, or in a mixture of Quichua and Spanish. Before and after the Ayahuasca ceremonies Don Armando uses a smoking anthropomorphic amulet-figurine called “Deco” (which was given to him as a gift by his Maestro, Don Firmin Icomena Manuyama, before he passed to Spirit), for divination and to detect unwelcome/negative energies or spirits. During the Ayahuasca ceremony he smokes two Mapacho cigars at once to invoke and summon the genios (mother spirits) of the shamanic medicine, and the spirits of the Palos Maestros (master trees), inviting them to the ritual to share Ayahuasca with them.

You may complement your Ayahuasca, healing diet, or shamanic plant dieta or apprenticeship retreat, with a San Pedro ceremony with Don Armando. Or else, for those who wish to do a more in-depth work with San Pedro, the legendary Cactus of the Four Winds, we also offer a full 8 days/7 nights San Pedro retreat with him (which includes 4 San Pedro, 2 Ayahuasca, 1 Camalonga and 1 smoked Toè ceremonies).

* Disclaimer: Please note that the traditional use of Coca leaves (whether fresh or dry) for shamanic, medicinal (including to treat/prevent altitude sickness) and religious rituals (including divination) is 100% legal in Peru. However, in most part of the Western hemisphere possession and use of the plant is restricted. Any other use of the Coca plant at the retreat other than for the performance of live rituals (for instance, when invoking its wisdom and healing powers), for the preparation of the Ayahuasca brew, and for the making of the concentrated brew of master trees by the shaman, will not be contemplated and authorized.

⇐ Back to the Ayahuasca & shamanic apprenticeship retreat programme